The Greatest Force And How To Use It - Star Wars was RIGHT! 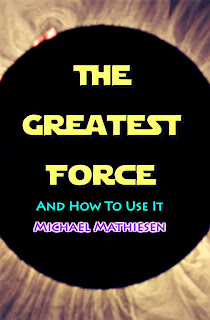 MAY The GREATEST FORCE - be with you - Always ~

The Greatest Force in the universe has been discovered by this author.  It's Einstein's suggestion, of course, but the real proof, that Einstein could not produce mathematically is inside of your mind, literally.  The only thing you need to do now - After reading this book - is how you can use the Greatest Force in your daily life.  Come back on or around Sept. 11th to get your free copy to find out how.  Could be sooner, so check back every day and when you can click on the cover to purchase on Amazon, and/or Audible.com you'll know it's available.

My latest work will explain the following Timeline in such a way that everything happening in the world will become clear to anyone with a brain.  Why is the culture in Decay?  Could it be the Weak Force  - The force in the universe responsible for the Decay of atoms?  If so, what do we do about it?  Can we use the Strong Force?  Can we use the Greatest Force? 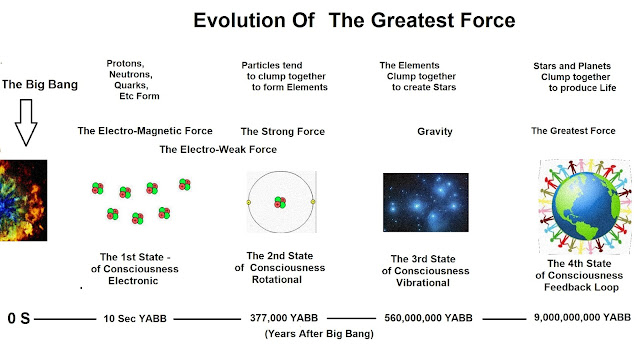 In the meantime, read the previous works of mine that lead me to the greatest discovery of all time.

MAY THE GREATEST FORCE BE WITH YOU ALWAYS~

The Greatest Force in the Universe has been discovered.  Next, you need to learn how to use it in your every day life.  Not to worry - this book will show you the way.

The Four Fundamental Interactions in the universe - The Strong Force, The Weak Force, the Electro-Magnetic Force and Gravity have long been thought to be tributaries of the same river.  In The Greatest Force, we explore the fact that this river has been discovered by research performed recently that is based on the 'Entanglements' of electrons.  They know about each other and therefore represent the first layer of Consciousness in the universe.  It is the flow of Consciousness from the Greatest Force, right up until the presentation of these words in your brain that make up the greatest way to connect the dots.

The Greatest Force knows where every point in the universe lies and what role it must play in the overall scheme of things.  Some of these points in the universe intersect at your location in Space/Time, therefore your fate is locked in to the same trending events of the Past, Present and Future.  What you need to do now is merely learn how these basic Laws of Physics impact all the events of your life every day.  It's not Rocket Science, and is instead one of the simplest things in the universe that can be known.

Einstein could not prove the "Grand Unification Theory" mathematically and was frustrated up until his death in 1952.  This is only because he was over-thinking it.  In this book, we prove Einstein's greatest theory that he knew in his gut to be the absolute truth about the universe and our role in it.

Give this book a read only if you are a curious Science buff who likes to learn about the latest scientific discoveries but without all of the blustering bluff, bombast and balderdash that accompanies most scientific papers.  This information can be completely understood by anyone with a basic High School education.  The Greatest Force planned it that way.

Is this The Force that they use in Star Wars?  I leave that up to your interpretation.  Science Fiction today often uncovers the truth about our reality in very interesting and entertaining ways.  This book will seem like Science Fiction to some, but when you complete your study and suddenly everything in your life snaps into place and things begin to go the way you had always hoped, The Greatest Force may be with you - Always!