My Latest Book - The Future of Cars - races on to the shelves today. Hope you can pick up a copy -

The Future of Cars - Available Now 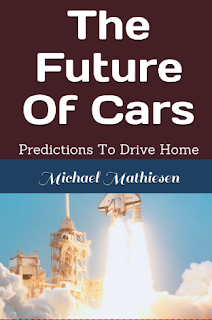 PRINT and KINDLE VERSIONS
Get Your Copy And Know Your Future

THINK about it.  We're getting used to the idea of Driver-Less or Autonomous Cars.  In the next few months and years, you may even find yourself in an Uber and the car is driving itself to your destination, safely and rapidly and without all the unnecessary conversation.

What if we took that same technology, expanded it some, and used it in Government so that we'd never have to hear all of the ENDLESS, unnecessary and boring conversations from the Senators and Congressmen - mostly White Men in expensive suits, who become millionaires while in office and who seem to possess extremely small minds, filled with extremely brittle and antiquated ideas and who take bribes on a daily basis by the organizations they have taken an oath to protect us all from.

IS THERE A BETTER WAY TO DRIVE HUMANITY INTO THE FUTURE?

How about an Artificially Intelligent and highly logical COMPUTER BRAIN?  How about an Autonomous Government where we have EVERYTHING under control?  Problems are solved before we even notice them as problems. If we can have Driver-Less cars that get us to our destination safely and quickly, why not a Tyrant-Less Governing system for making the RULES of the ROAD that cannot be compromised or bribed away?

This is the first book to entertain such an idea.  I hope you find this GREAT NOTION as entertaining as I do.

Current events are demonstrating very clearly to any thinking brain that our system of moving ourselves around the planet and our system of making up all the rules that we must obey are fatally flawed.  We crash into each other and into buildings at an ever-increasing rate while we are all pouring tons of toxic fumes into the atmosphere which is DRIVING us all crazy.

Posted by Author of The Green New Deal at 1:17 PM